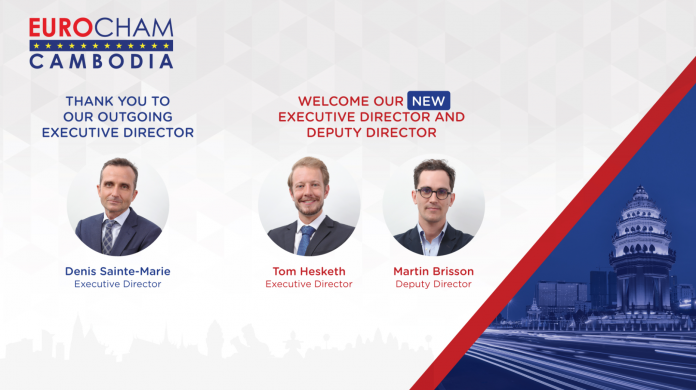 EuroCham said Tom Hesketh – who was previously deputy director – was selected after exceling in the highly important services and project management fields. Adding he had secured, together with the whole EuroCham team, that the aforementioned transformation could be based on a solid financial foundation.

“Tom Hesketh became deputy director two years ago, and according to the board are sure that he will assume this next step in his career professionally, empathetically and again with the support of a strong, committed team. Continuity in reform and stability in our ongoing operations are key to continuing our journey in Cambodia as the country itself transforms and reforms,” EuroCham Chairman Tassilo Brinzer said.

Speaking to Cambodia Investment Review Tom Hesketh said by all metrics, EuroCham is proudly the largest international chamber in Cambodia.

“This is the direct result of the work of past Directors, Board members, and our hugely successful national chapters. With Martin on board, I look forward to combining the very best aspects of membership care & community building from CCIF-C, with the high-quality advocacy, events, and support initiatives EuroCham has become known for,” he added.

The chamber acknowledged the huge progress in cost reduction, revenue increase and member increase, overall activities and its advocacy drives.

“We have even managed to reduce our energy consumption by 25% in the office, as the award won by EuroCham last week at the Cambodia Energy Efficiency Competition proves. The board, the team, and myself very much wish Denis great success and luck in his new challenge. It has been a pleasure to work together,” Brinzer said.

In a statement Denis Sainte-Marie said that after two years devoted to the transformation of your chamber, I completed my assignment as executive director last Friday. He wanted to thank everybody involved for their support and commitment in making EuroCham the most active foreign chamber in the Kingdom.

“Despite having to implement a new revenue structure, together we maintained a full range of activities including holding fruitful dialogues with the Royal Government of Cambodia and championing a sustainable and digital agenda,” Denis said.

“A fully dedicated, structured, and diverse team is excited to pursue this journey under the leadership of my deputy during these last two years, Tom Hesketh. It was both an honor and a pleasure, alongside the team and under the guidance of the Board and its Chairman, Tassilo Brinzer, to serve you,” he added.

Denis said that he was convinced that EuroCham, with the newly elected Board of Directors and twelve sectoral committees’ leading teams will continue to develop on the foundation built during the last decade and create a more inclusive and inviting business landscape for the future.

EuroCham Chairman Tassilo Brinzer added he was also delighted that Martin Brisson, the long-term director of French chapter, the CCIFC, will be joining the EuroCham team as deputy director.

“After having led the operations of the CCIFC successfully to a membership record and stable financial basis during the past years, he is moving on to a very challenging role at EuroCham, where he will be warmly welcomed to contribute his experience and network to our mission,” Tassilo said.

“Martin knows the team of EuroCham well due to past close cooperation with the CCIFC, and his responsibilities will be to increase our membership further, improve our membership communication and the efficiency of our digital tools, while at the same time broadening our services and project management capacity,” he added.

EuroCham elects seven new board of directors at 2022 AGM