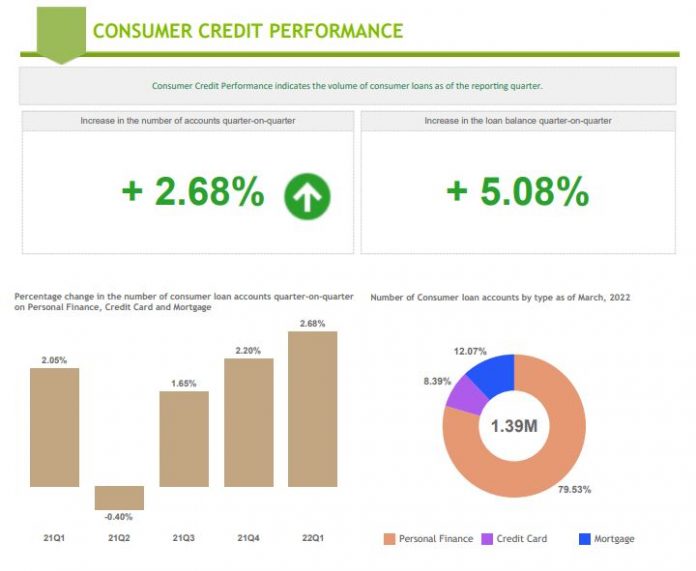 Consumer credit in Cambodia has grown to over $12.5 billion in the first quarter of 2022, representing an increase of 5% quarter-on-quarter as accounts overdue by 30 days or more jumped 21% to a total of 2.35%, according to data supplied by Credit Bureau of Cambodia.

An increase in overdue accounts

The rise in accounts overdue by 30 days or more was most prevalent in the coastal region of Cambodia with an increase of 66% to a total of 2.95% while the Tonle Sap region remains the highest with non-repayments at 3.67%.

The large increase in overdue accounts is most likely attributed to the decision of the central bank decision to reclassify loan accounts that have been restructured previously to non-performing status.

Tongngy Kaing, spokesperson for the Cambodia Microfinance Association said an increase in overdue loans was expected after the sector is preparing to exit the COVID-19 impact.

“Loan restructures have been restricted since the beginning of 2022 and the increase is expected to remain at manageable levels,” he said.

According to a circular – not publicly released but seen by Cambodia Investment Review – the National Bank of Cambodia is requiring previously restructured loans that need ‘more restructuring’ should be deemed as non-performing.

It added loans that are deemed ‘non-viable’ shall be classified as a loss at the full amount of loan value. For customers that have not been restructured before and are impacted by COVID-19, this shall not be classified as non-performing.

To read more about the restructuring guidelines click here.

In addition, the report found that almost 13% of borrowers had 3 or more loan accounts and 28% were borrowing from multiple lenders across the sector.

Cambodia’s microfinance sector has come under scrutiny by non-government organizations after a 2013 study revealed concerns about the number of overindebted clients.

According to research conducted by the association, the findings on customers with multiple loans are “indisputable: customers with more than three loans have a significantly higher risk of over-indebtedness compared to those with fewer loans”.

In response, the financial associations launched new lending guidelines stating lenders cannot issue loans active loans listed in the database from three or more financial institutions if none of those loans has an original disbursement amount greater than $20,000.

According to the MFI, the negative impact of the pandemic on businesses that are outside the agriculture value chain remains substantial.

Cambodia’s largest deposit taking institution Prasac Microfinance posted an annual after tax profit of $155.5 million in 2021, increasing 42.9% from $108.8 million in 2020 as overdue loans remained stable at 1.54%.

The increase in profit was attributed to increased interest income rising to $505.35 million in 2021 from $430 million in 2020 from a rising number of depositor and loans the company made.

ERA Cambodia announces plans for 2023 reinforcing the potential of condominiums...