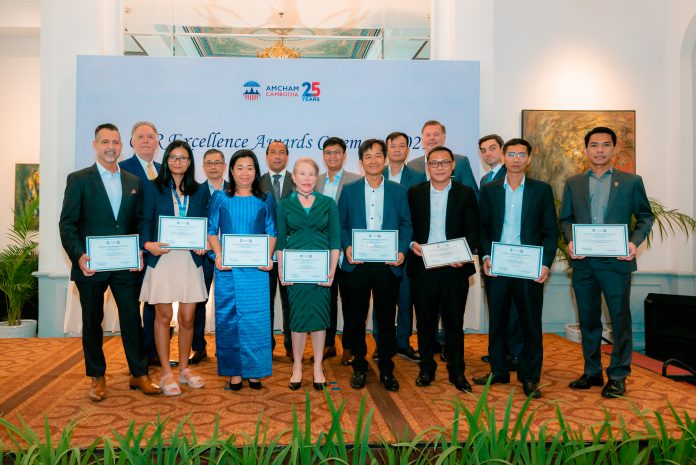 The American Chamber of Commerce in Cambodia (AmCham CSR) hosted its annual Corporate Social Responsibility awards – highlighting the good work many of its member companies and investors do to give back throughout the year.

Anthony Galliano, President of AmCham said in his keynote speech the United States of America is a nation of giving and those traditions are carried on here by our members in Cambodia.

The awards were judged by three US nationals Lauren Higgins, Economic Associate at the US Embassy, Sabine Joukes, Chief of Party for the USAID-funded Women Entrepreneurs Act project, and former State Department diplomat and ambassador William Munroe.

Money transfer network and commercial bank Wing Bank won the social impact award after it funded free treatment at a children’s hospital and established a donation drive through its nationwide agents. Finance and insurance provider AIA (Cambodia) Life Insurance was runner up.

Including the three category winners, there was also a judge’s special recognition which was awarded to Amru Rice, Fourth Culture and Khmer Organic.

All 18 selected companies also received recognition certificates for their participation in the event.

AmCham CSR awards one of the chambers four-pillars

The AmCham board has made CSR one of its four pillar missions for 2021 adding the chamber itself has also been contributing in goodwill activities.

During the year AmCham members contributed to the ad-hoc committee in the fight against Covid, in a series of events, donating computer equipment, medical supplies, and foods.

“We must recognize the importance of giving back, not only to do business and make profits but to reciprocate the country and its people for the benefit of being able to do business in a country and people that welcome us,” Galliano said.

“The world is facing incredible challenges, especially in the areas of climate change, pollution, gender equality, and still poverty and education. As foreigners we should view ourselves as “citizens in spirit” and support the country we do business in,” he added.

It was revealed that AmCham is now also forming a separate and dedicated CSR Committee given the Board’s focus on tackling the issues of Climate Change, Gender Equality, Environmental Protection, Poverty Reduction, and Education. It’s part of our four pillar mission.

Growing membership, engagement and advocacy for the AmCham community

The chamber has also been developing its three other pillars which include membership growth, membership engagement and advocacy.

Galliano said the chamber has been growing its base for scale and resources to serve the membership better.

“We want to be meaningful and impactful as a chamber and we have achieved 40% growth this year and this is accelerating as the market recognizes AmCham is now a major player and has the energy and passion to make a difference for business in Cambodia. We have our hardest working Board ever,” he said.

In addition, the board has sought to improve membership engagement through “tenacious and persistent dialogue with its members”.

“Viewing our members as customers and recognition and respecting that we are here to serve them. We hired a membership engagement officer just for this purpose and we are committed to listening to the “Voice of the Member,” Galliano said.

The chamber has also maintained and launched several advocacy committees for Legal and Tax, Women, Beer, ICT, Real Estate and Construction and Education.

“We will use the government channel of Working Group D which we are a member, but also leverage alternative avenues as appropriate in the best interest of our members,” Galliano said.

“We need not only to listen to the members and our customers but to execute and support them, addressing the challenges they have and their market issues,” he added.

AmCham will hold its Annual General Meeting on December 14. All AmCham members were advised to attend and vote in the annual board elections.

Founded in 1996, AmCham supports, advocates and promotes forward-looking Public and Private Sector collaborations that contribute to the regional and global advancement of the Cambodian business environment, professional development, and technological innovation in the overall achievement of meaningful, diversified economic growth.