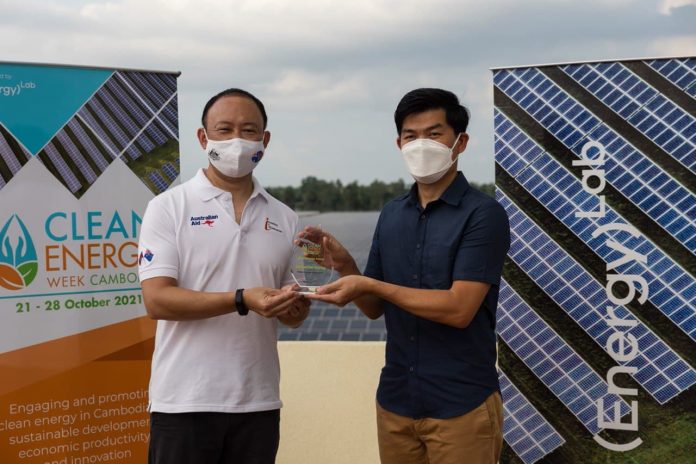 SchneiTec has built several solar farms in Pursat province, Kampong Chhnang, Kampong Speu and Svay Reang that is a total of 240 Megawat.

The Australian Ambassador to Cambodia, Pablo Kang and Melissa Liu, Country Manager of EnergyLab Cambodia presented the award during a visit to the company’s solar farm last week.

Liu announced the award stating the company had successfully built solar farms across the country adding the farm was able to assist Cambodia during the widespread power shortages in 2019.

“The company has provided 3.5% of Cambodia’s electric power from their solar farm last year and in 2021 this will be higher,” Liu said.

“SchneiTec Group is supporting the growth of solar power in Cambodia and we are proud to give them the clean energy trophy of 2021 to them,” she added,

Dr. Heng Socheat CEO of SchneiTec Group thanked EnergyLab for the award adding his team worked day and night during the 2019 power shortages to bring the farm online as quickly as possible.

“I dedicate this award to the SchneiTec team who built the solar farm and provided the national grid with clean and renewable energy,” he said.

The award is part of the organization’s annual “Clean Energy Week Cambodia”, a week-long event that aims to promote clean energy entrepreneurs and businesses and is given to outstanding individuals and companies in the field.

The campaign this year is being held virtually from October 21 – 28. Clean Energy Week has in total 15 online events that are available to watch live or recorded via the organization official Facebook page.

Clean Energy Week aims to raise the profile of clean energy and explains its importance and the benefits it brings to the Kingdom. The Royal Cambodian government is currently in the process of finalizing its power plans out to 2040.

Current plans will mean Cambodia’s electricity by 2030 will be 75% from imported fossil fuels.

They added they would like to support Cambodia to keep the share of clean electricity to 50% – by investing in local solar and wind power balanced with fast-acting batteries or gas engines (and of course using the existing power sources already built).