How to increase Cambodia’s workforce productivity? 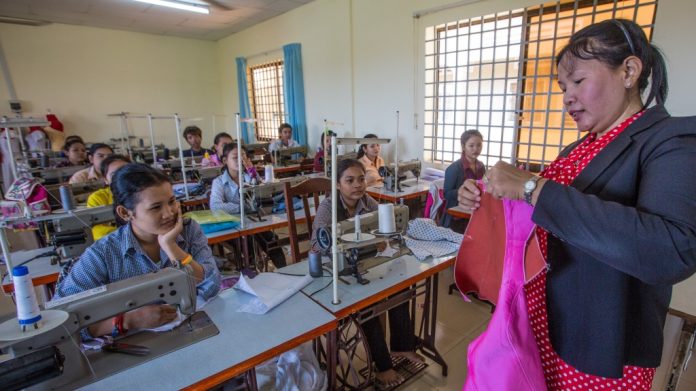 Cambodia’s total workforce output level will require quick and significant investment in multiple areas if Cambodia is to achieve its ambitious aim of becoming an upper-middle country by 2030, says the World Bank’s Country Economist for Cambodia.

Upper middle-income countries are defined as economies with a gross national income per capita between $4,406 and $12,535 that currently includes regional neighbors Thailand and Malaysia.

Claire Honore Hollweg, Senior Country Economist for World Bank spoke to Cambodia Investment Review, after the recent World Bank report that highlighted how both the public and private sector can increase the overall output of Cambodia’s workforce.

Claire added: In 2015, Cambodia graduated from a low-income to lower-middle-income country, and has set a target to become an upper-middle-income economy by 2030. COVID-19 has made this ambitious target even more challenging.

Cambodia’s low labor productivity, or output per worker, which lags behind most countries globally when at Cambodia’s development level.

Total factor productivity is a major requirement for economies with a relatively low population base such as Cambodia (with approximately 16 million).

The report’s recommendations center on what government policy can play a role in supporting increased productivity.

“Private sector can also play a role. For example, there is strong evidence that management practices within companies matter a great deal for a firm’s productivity. Technology adoption as well as investing in the labor force through on-the-job training also matter for firm-level productivity,” Claire said.

Cambodia Investment Review had previously reported on the Worldbridge Group’s ‘game-changing’ i4.0 SME Cluster site development located in Kandal province with the project aiming to facilitate Cambodia to leapfrog into modern and responsible manufacturing practices.

Cambodia must expand on its current base

Many consider Cambodia in the “next phase” of its development as it approaches graduation from Least Developed Country, predicted to be in 2028. This will mean Cambodia may lose its trade benefits and will need to compete on even trade terms with other more developed nations as well as a shift from large economic aid and concessional lending to a self-supporting nation.

“First, as the report tries to highlight, Cambodia has achieved very strong export performance, in manufacturing, agriculture, and services with notable achievements in some sub-sectors or products. Key examples include garments/footwear, rice, and tourism.”

“Second, Cambodia’s manufacturing sector has new growth opportunities, in addition to the challenges. For example, as the report notes, recently signed trade agreements are opening new opportunities for Cambodia’s exports, while Cambodia’s growing incomes are changing the types of products and services demanded by its own domestic population. “

In summary, Claire says that recognizing both Cambodia’s past achievements and future opportunities along with the challenges confronted by the manufacturing sector can help support the policy agenda.