Lacking spark: Why is Cambodia’s light electric vehicle market taking so long to set off? 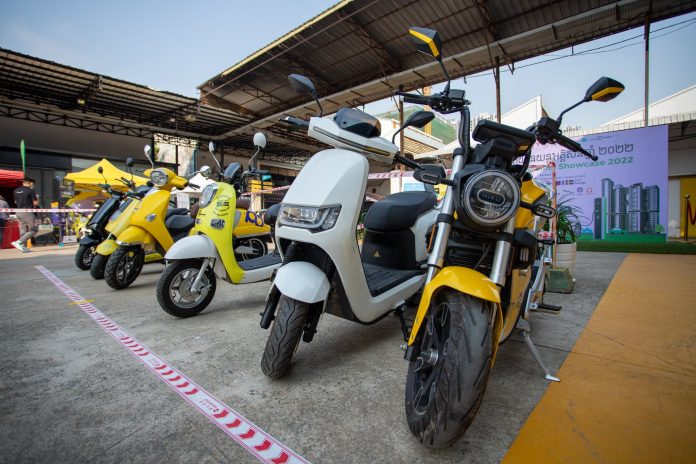 Despite Cambodia being dominated by two-wheeled transport, only 0.5% of some 4 million motorcycles are currently electric. This is despite huge regional growth and the adoption of electromechanical technology within the transport sector, begging the question, why?

According to market research group Vynz, the Asian light electric vehicle market is predicted to grow at a compound annual growth rate of 8.0 percent, reaching $54.8 billion by 2027.

Different products such as e-scooters and e-motorbikes are contributing to the majority of the light electric vehicle (LEV) market in Asia.

“The market has witnessed significant demand for LEV products and services over the last few years. Key factors driving the growth of the Asian light electric vehicles market are technological advancements, government support, rapid urbanization, and low maintenance requirements of these vehicles.”

Vynz also added that these advancements in the electric vehicle industry continue to increase performance and efficiency found in products, while making them more affordable, adding to their appeal.

While the LEV products continue to improve, the blame for the electric revolution’s slow start is not due to a lack of governmental ministries and organizational support either, with the Ministry of Environment, Ministry of Public Works & Transport, and the National Council for Sustainable Development (NCSD), all backing the switch.

“[Electric motorbike] technology not only reduces air pollution but also can save people money. Reducing air pollution is a priority as it directly impacts the health of the population. If people can do that while saving money, we support it. We estimate that a person who switches to electric could save at least $2,000 in the future while reducing pollution.”

He said officials across the government are already looking at tax incentives on the import and production of electric vehicles and encourage the development of electric charging stations in major Cambodian cities.

To read more about the recent government panel discussion on EV in Cambodia click here.

Electric motorbike company VOLTRA the first Cambodian registered company manufacturing and selling LEVs in Cambodia – remain confident that it is just a matter of time before the local market realizes the benefits of switching to LEV.

“There is no doubt the demand is growing and will continue to grow in Cambodia. There are so many selling points apt for the Kingdom,” said CEO and founder of Voltra, Yann Vaudin.

He said that as a result of this market demand, VOLTRA has decided to create the MATRIX, their newest flagship model.

“The MATRIX is by far one of the best LEV in the Southeast Asia market. With a speed of over 60km/h and a range of over 100km, it is a robust, long-range, technologically advanced electric motorcycle.”

“Compared to petrol motorbikes, the VOLTRA MATRIX runs around seven times cheaper, with it being the lowest in electricity consumption on the market, at 12 riels per km. Its removable battery allows the user to charge it anywhere with ease and it’s also very cheap to maintain as it has fewer parts and its engine doesn’t need to use oil.”

However, Vaudin did help point to some reasons why the Cambodian electric vehicle market may be struggling to gain traction.

“Unfortunately, even with this model, despite the return on investment due to the exceptionally low maintenance costs, the price difference between cheap gasoline-powered motorcycles and electric motorcycles is still too much. Therefore, Cambodians opt for classic motorcycles. That’s why our mission is to get the good news out there about how much cheaper and convenient electric motorcycles can be in the long term.”

Vaudin also said that it is not only personal buyers and companies who purchase VOLTRA vehicles who are set to benefit, but hopes that the wider positive environmental impacts and the business opportunities which LEV production represents will spur the government to boost the LEV market through various reforms.

“Supporting LEV business through reform is making a commitment to environmental solutions and reducing pollution. We are therefore expecting a strong gesture from the government by decreeing a reduction in taxes on two-wheeled electric vehicles. First decree on imports of spare parts, subject to each company proving partial local production and second decree an exemption from income tax for 1 or 2 years to allow local companies to develop and provide a lower price to consumers.”

“To conclude, the government must launch a national information campaign to promote this means of transport because, without the government, we will not be able to change the habits of the population in terms of personal transport.”

Secretary of State of the Ministry of Environment (SSME) Ponlock Tin has also firmly backed the use of LEV adoption, because of the boost it will give Cambodia in reaching international emissions reduction targets.

“We are still at the stage where it is important to change people’s mindsets to adopt e-vehicles. Not only are operational costs much cheaper, but there are fewer parts and lower production costs. This is before considering the positive impact LEV adoption will have on the environment. We support this switch because of the contribution to the reduction of gas emissions it will have, which is in line with the sustainability goals.”

To read more about the EV showcase event held at the Factory click here.

He added that he expects that electric-powered engines will make up about half of all vehicles on the road in the near future.

“If favorable investment conditions are offered, EV alternatives will continue to grow. It is no secret that there is an increasing number of companies interested and invested in the electric vehicle market in Cambodia. Then we can then start to talk about localizing production to reduce the product cost and create jobs moving forward. With other countries already moving towards this new technology, we have to move with it otherwise we will become a trash bin for old technology.”

He added that It is important for Cambodia to adopt electric technology in order to move with the times.

“We need to avoid being faced with the prospect of being sold old polluting vehicles or outdated tech by other countries who were quicker to act,” he added.

Indeed, while petrol costs continue to rise, COVID continues to cause economic uncertainty and the climate crisis looms in the background, it seems only a matter of time before Cambodia jumps on the electric bandwagon.