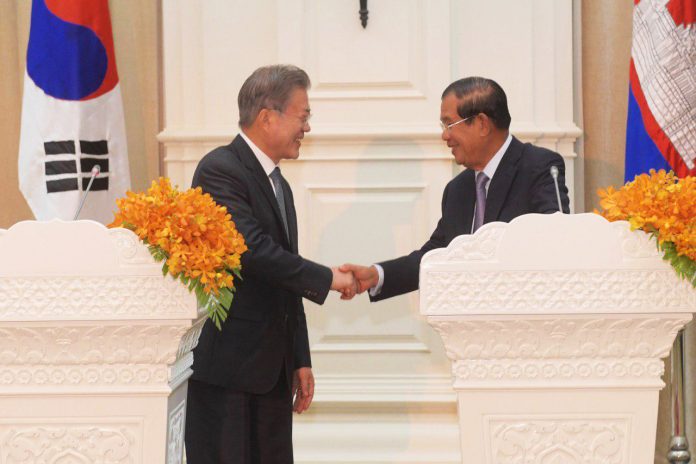 South Korea’s increasing investment in Cambodia is now worth over $4.4 billion as the two nations look to also strengthen diplomatic ties through economic cooperation and bilateral trade estimated at $1 billion annually.

Cooperation between the two countries over trade, investment, economic cooperation and infrastructure will be further enhanced after the Cambodia-Korea Free Trade Agreement signing.

Development assistance programs have been earmarked in the fields of infrastructure, science, health and education have also been ongoing.

Reflecting the increase of private investment into Cambodia, one of the four largest domestic banks in South Korea – Woori Bank – obtained a full commercial license from the National Bank of Cambodia.

South Korea has begun expanding rapidly into Cambodia’s developing finance sector in 2011 after helping to launch the Kingdoms securities market the CSX sharing a 45 – 55 percentage split with the Ministry of Economy and Finance.

Cambodia Investment Review, previously interviewed PPCBank that was also fully acquired, in 2016, by the Korean consortium of South Korean JB Financial Group and what is now OK Financial Group (a conglomerate run by Korean Japanese entrepreneurs), each obtaining 60% and 40% of stakes respectively.

PPCBank outlined that South Korean firms are entering into the Cambodian market as a part of an overall trend of Korean financial institutions expanding into the South Asian region, “where they see high growth potential and alternative market opportunity”.

The South Korean government recently provided a $3.3 million grant to the Ministry of Agriculture, Forestry, and Fisheries to support value-added agriculture in the province. Some targeted crops include Napa cabbage, broccoli, and white cabbage.

Last year, Korea International Cooperation Agency (KOICA) granted $7.9 million to the Royal University of Phnom Penh to build a specialized incubation business hub for its students. The grant aims to develop the local entrepreneurial ecosystem – a major factor for Cambodia to achieve its middle-income goal by 2030.

Diplomatic ties between Cambodia and South Korea in 1997, Cambodia-South Korea-Asean in 1999 and the current progress of the bilateral relations between the two nations.

The country has been wanting to expand trade ties with emerging nations – such as Cambodia – and reduce its economic reliance on China and the United States, which accounts for around 40% of its overall annual exports.