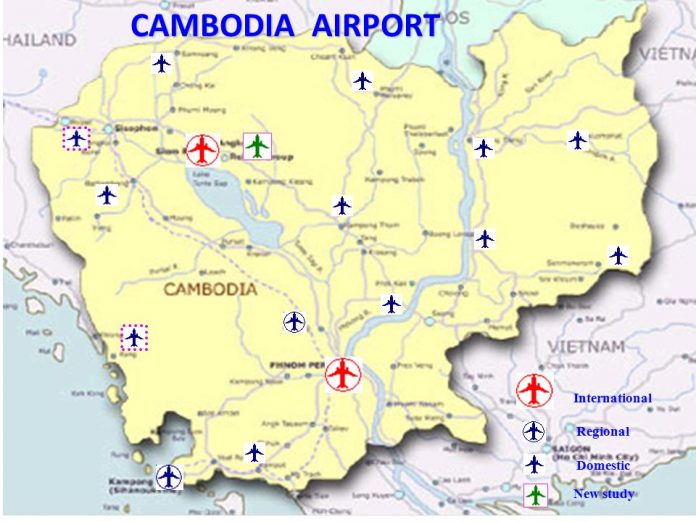 Airports in Cambodia, are on the expansion recording over 11.6 million passengers in 2019 with several new airports coming online soon. In this explainer, we take a look at the current international airports, regional ones, as well as those currently in construction.

Cambodia has seen rapid economic progress over the last 20 years, generally averaging 7.7 percent growth annually, with a large part of this economic miracle being down to tourism.

To read more about the economic outlook click here.

Therefore a lot has been spent on tourist infrastructure within the Kingdom, much of which has or is going towards upgrading the airport infrastructure.

While international arrivals dropped by 92 percent (136,680) in the first half of 2021 as restrictions have been lifted numbers have started to rise again. Although far below pre-pandemic tourist numbers have begun to rise and new routes have been added as of Q1 of 2022.

From a legal standpoint, every airport in Cambodia falls under the regulatory guidelines of the State Secretariat of Civil Aviation (SSCA), in reality, though the current international airports in Cambodia, namely Phnom Penh, Siem Reap, and Sihanoukville are governed by Cambodia Airports.

Cambodia Airports is a public-private partnership set up in 1995 between VINCI Airports and the Royal Cambodian Government that gave the concession for the development and management of Cambodia’s three international airports for 45 years.

VINCI Airports are one of the biggest constructors and managers of airports in the world, currently running 53 airports in 12 countries, as well as employing over 12,000 people according to their website.

Their portfolio includes some of the busiest and most important airports in the world, such as London Gatwick, in which they own a majority stake.

Currently, the biggest and busiest airport in Cambodia has seen a number of high-cost renovations within the last five years. This has included a $12 million upgrade on general infrastructure for passengers, as well as expanding the runway to 3000 meters to meet demand as the tourist industry continues to grow.

• 35 airlines in operation to and from the airport.

The second most important airport in Cambodia and build to primarily serve the tourist city of Siem Reap and specifically is just 5km from Angkor Wat.

• 31 airlines in operation to and from the airport.

The most recently developed airport, having seen 2018 renovations that increased the size of the terminal by 80 percent. It serves the coastal city of Sihanoukville, which has a large Chinese ex-pat community as well as the gateway to both the islands of Koh Rong and Koh Rong Sanloem and the province of Koh Kong.

• 10 airlines in operation to and from the airport.

New airports under construction in Cambodia

There are talks about several new airports in Cambodia, but there are currently four that are confirmed, being built, and have at least an expected opening date. These include new airports in both Phnom Penh and Sihanoukville, as well as two international airports in the currently underdeveloped Koh Kong province.

This will be the first time that airports within Cambodia will not be run by the Cambodian Airports Company, with the new projects seeing significant Chinese, as well as local investment.

Located in Kandal province which borders Phnom Penh, specifically in the Stung District. It is being built at an estimated cost of $1.5 billion. Planned to be operational by 2023, although it has suffered various setbacks related to the pandemic and currently has no fixed date of opening.

When opened it will have an initial capacity of 13 million passengers, which is expected to rise to 30 million by 2030.

According to centreforaviation.com “OCIC (Overseas Cambodian Investment Corporation), a private firm with a pedigree in funding large scale real estate ventures, is the principal investor in the new airport in a JV with Cambodia’s State Secretariat of Civil Aviation”.

It will carry the airport code PNH (replacing the current airport) and will be known as the “Techo Takhmao International Airport” according to government reports.

Located around 51km from downtown Siem Reap and 40km from Angkor Wat the new airport is expected to cost around 1 billion to build. Again slated to be open by 2023 there are ongoing reports about its “level of construction” from both the government and local news outlets.

The new project is planned for completion over three phases, with part one raising the current capacity from 5 million passengers per year to 7 million. This is scheduled to increase to 10 million by 2030 and 20 million by 2050.

The airport is licensed and being invested by Angkor International Airport Investment (Cambodia) Co., Ltd., an affiliate of China’s Yunnan Investment Holdings Ltd.

It is being done under the build-operate-transfer (BOT) business model, which covers five years for construction, followed by a 50-year concession for the operation of the airport.

One of the most controversial airport projects in Cambodia because the company making the airport is officially sanctioned by the US government.

Despite the controversy, the airport is seen as a huge investment and is part of the wider Dara Sakor project. The Dara Sakor project is being developed and will be managed by the Tianjin Union Development Group (UDG).

The group secured a 99-year exclusive concession in 2008 for the new airport with a reported initial investment of $200 million. UDG’s plans also include the construction nearby of a Cambodia-Chinese Investment and Development Zone that will include a free trade area, shipping port, and seaside resort according to the Centre for Aviation.

UDG was sanctioned by the US government in 2020 due to its actions in Cambodia stating: “After falsely registering as a Cambodian-owned entity to receive land for the Dara Sakor development project, UDG reverted to its true ownership and continued to operate without repercussions.”

Why have one international airport when you can have two? A $40 million joint venture between Ly Yong Phat’s LYP Group and Bangkok Airways Pcl Koh Kong Airport is intended to replace the current domestic Koh Kong Airport (KKZ) and will thus keep its airport code.

Currently, the project appears to be on hiatus but is still expected to not only be completed but to serve international as well as regional flights.

While domestic routes have tended to be focused on Siem Reap – Phnom Penh and Phnom Penh – Sihanoukville. There are though some military, or private airports which currently are fit for either fixed aircraft or helicopters that could be converted into commercial sites.

This article is part of Cambodia Investment Review’s Explainer series. A simple guide to everything you need to know about business and investment in Cambodia.

Explainer: Cost of living in Cambodia

Explainer: Can foreigners own land in Cambodia?

Explainer: What is the tax rate in Cambodia?