Explainer: How to a start professional football team in Cambodia? 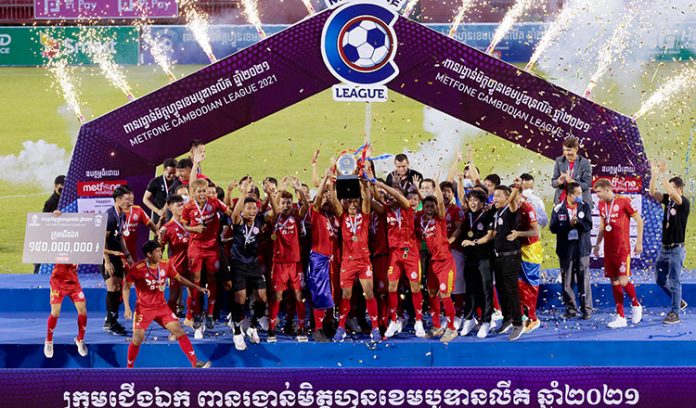 The recent regulatory and financial changes to how football is managed in Cambodia have led to several amateur clubs turning semi-professional as well as at least one start-up club.

So what does it cost to set up a professional team in the Kingdom?

The basic premise is that clubs in either division would now have to meet certain financial, management, and infrastructural standards, done via a points-based system as set out by the Asian Football Confederation (AFC), before being granted a pro-license.

Of the now 20 clubs to have been granted professional licenses by the CPL, all bar one were established clubs in their own right, with Next Step FC being the exception to this rule.

Next Step FC is largely the brainchild of Charlie Pomroy, a British national who has been involved in both amateur and professional football for over 18 years. Last season he was the full-time head coach of the professional Soltilo Angkor FC of Siem Reap.

Following a fairly well-documented and acrimonious parting of ways between the two, he set about to establish his own club. Next Step itself already existed as an academy for young players, so making the switch to being a professional side would theoretically be easier and the next “logical” step.

Making the jump though obviously costs money, with Pomroy initially taking a $6000 loan, since supplemented by donors and his own salary, which over 7 months have meant a $14,000 total expenditure so far. A decent proportion of this money was spent on the setting up of a legal company, a prerequisite for the league, but also a notoriously slow, costly and cumbersome process within the Kingdom.

To read our explainer guide on setting up a company in Cambodia click here.

Current pre-season costs work out to around $1200 a month, divided between part-time staff, office rental, and the general costs it takes to run a business in the country. Pomroy estimates that these costs will rise to around $3000 a month once the season begins, or around $36,000 a year.

Therefore for all intents and purposes and ignoring sporting aspects such as attracting players and fans, to run a lower level football club in Cambodia will cost at least $50,000 a year to set-up. For context, the top-tier clubs in Cambodia work on budgets of around $600,000 a year, as previously stated by Satoshi Sato, CEO of the CPL.

With yearly operating costs of at least $50,000 the club acknowledges the need to raise income and relatively fast to become solvent and further the project, with Pomroy stating “The biggest source of income will be from local businesses ($3000 a month targeted) who can see the benefits of partnering with a football club in Cambodia during this exciting growth period. If we can reach this fairly realistic target then we can just about achieve solvency”.

Said income would come from several different sponsorship streams, such as kits – targeted at $10,000 for the season, down to $300 a month for billboard adds at the stadium, with a slew of other options in between.

And of course, another main source of income would be gate receipts, with the club claiming to attract fans that number into the thousands to their matches. In this area, they hope to raise up to another $10,000 per season, although the club acknowledged this was a variable related to how well the club perform on the pitch.

Next Step have also keenly embraced the online arena, have a huge social media following, as well as being one of the only clubs to have made an app.

This is intended to not only help further the brand but also with another source of revenue, merchandise, with Pomroy stating “We’ve sold 152 shirts in 7 countries already we just can’t process any of them without setting up payment plans on our website”. With the market for so-called “obscure” football shirts having a cult global following.

As of yet though the club is still largely in search of sponsors and are not yet at a level one would consider solvent, although Pomroy was quick to add that “We have a couple of diamond donors (my dad and my friends dads) who will always help out if we’re desperate”.

How do you turn passion into profitability?

Yet while the current aim is to make the club solvent and able to complete the season, the long-term plan is to turn the club into a profit-making enterprise, with Pomroy adding.

“I believe we can be turned into a profit-making business for sure. Football clubs throughout the world are bought and sold for huge sums, so this is still a growth industry. Longer-term our sustainability initiative which will kick in later this year will see us open a training center, international academy and exchange program that will generate income from all over the globe”.

As with any investment, there are always a lot of hypotheticals when it comes to success, but with a sound and conservative business plan, the club is potentially onto a good thing.

This article is part of CIR Media’s Explainer series. A guide to everything you need to know about business and investment in Cambodia.