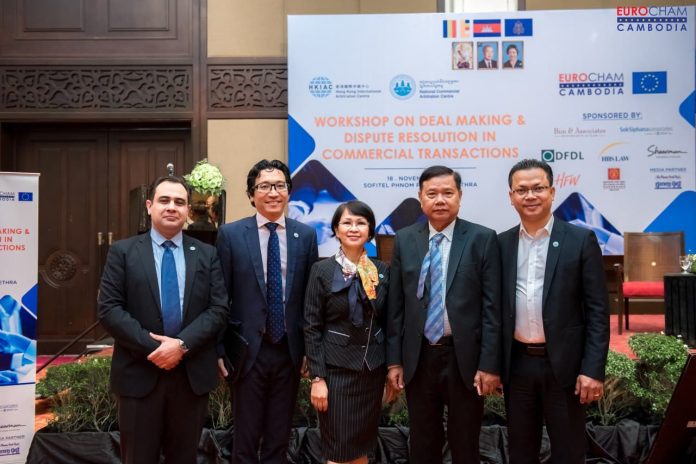 The NCAC reported that it had received a notice of arbitration accompanied with a request for interim measures through an emergency arbitrator on 14 January 2022. The dispute involved Cambodian and foreign parties operating in the real estate sector. In accordance with the 2021 NCAC Rules, an award was issued by the emergency arbitrator within fifteen days.

In July 2021, CIR reported on the passage of the 2021 NCAC Rules. The rules, which came into effect on 28 June 2021, contained substantive changes from their previous iteration, such as provisions for emergency arbitration and expedited procedure.

Emergency arbitration is a relatively recent trend in international arbitration. Under new rules, a party may approach the arbitral institution to seek the services of an emergency arbitrator in case of urgency, who may be appointed within three days and is required to render a decision within fifteen days. Urgent action is needed when there is no other remedy available and any delay in action could lead to irreparable harm to one of the parties.

CIR reached out to NCAC’s Secretary-General, Siden Din, who said: “All arbitrators empanelled with NCAC are qualified to act as emergency arbitrators. In practice, selecting an emergency arbitrator largely depends on their availability. As this is a new feature which requires them to act within a short timeframe, the NCAC also provides secretarial support to our member arbitrators to ensure that their decisions may be made on time.”

Mr Din further underlined Emergency Arbitration as a powerful new tool in the arsenal of businesses and investors in Cambodia: “Interim awards, such as this one, are enforceable in Cambodia as provided under Article 25 of the Law on Commercial Arbitration.”

Mr Din clarified that subject to the language of the arbitration clause or agreement, parties that have entered into contracts prior to the adoption of the new rules will also be able to take advantage of the emergency arbitration procedure unless they have expressly chosen to opt-out of these rules.

“It is preferable to use Emergency Arbitration (EA) if a party needs the decision to be made within a short timeframe. It is even more preferable to use EA when it comes to cross-border disputes, where the decision of an emergency arbitrator would be enforceable in the member-states of the New York Convention. This distinguishes the process from a court decision. It will always be up to the parties to decide whether to opt for injunctive relief through courts or EA for interim measures. Each case is unique owing to its nature and circumstances and requires careful consideration before resorting to either courts or EA,” he said.

The enforceability of interim awards has been a point of contention within the legal community. While Cambodia is a UNCITRAL Model Law jurisdiction based on its adoption of the 1985 Model Law provisions in its Law on Commercial Arbitration, it has yet to adopt the 2006 amendments made to the Model Law, which deal specifically with the enforcement of interim measures.

Keattech Tan, a partner at HBS Law and practising litigator, told CIR: “While Emergency Arbitration proceedings are time-efficient and more transparent in nature compared to injunction proceedings at the local courts, the enforceability of EA awards themselves is still quite uncertain. The 2021 NCAC Rules require the parties to voluntarily comply with the awards, but since applicable laws are silent on the process for their compulsory execution, this uncertainty persists. Therefore, as counsel, if I believed that voluntary enforcement may not be possible, I would advise my clients to pursue injunctive relief with the courts.”

Nishant Choudhary, a partner at DFDL, referred to Japan, which has similarly yet to include the 2006 Model Law amendments in their national legislation. “This means that parties in Japan can currently only resort to seeking damages at the time the final award is rendered for any violation of an interim measure, rather than being able to take advantage of interim measures that may be enforceable by the courts. As Cambodian courts do not regularly provide public access to their judgments and decisions, the technical details of their reasoning remain relatively unknown, and it is not possible to predict with certainty how they will act when faced with a motion for an execution ruling of an interim arbitral award.”

In the final analysis, while the NCAC has been keeping in lockstep with the international arbitration community by adopting top of the line, innovative rules that are in accordance with international standards and trends, the legislative and judicial machinery in Cambodia has fallen further behind other countries in the region and globally.

More steps are needed to bring Cambodia’s legal framework governing arbitration in line with international standards so as to enable these new tools needed to make arbitration more effective. Similarly, there is a need to increase transparency, accountability and responsiveness in the judiciary so that it may be able to credibly support arbitration and ADR in the country, which can not only help decongest the heavily-backlogged judicial system but also provide a much-needed fillip to investor confidence.

Cambodia does not need to look too far to seek support for bringing about legislative change. On 5 March 2021, the Ministry of Justice in Japan produced a body of text on proposed amendments to Japan’s Arbitration Act. These amendments have been written with the aim of propelling Japan into a regional dispute resolution powerhouse by bringing them at par with international standards.

The proposed amendments specifically address important issues in ADR such as interim measures, the jurisdiction of courts, and the enforceability of mediated settlements. Perhaps Cambodia can take a leaf out of Japan’s book?

Anirudh Singh Bhati is an India-qualified lawyer and legal researcher based in Phnom Penh.