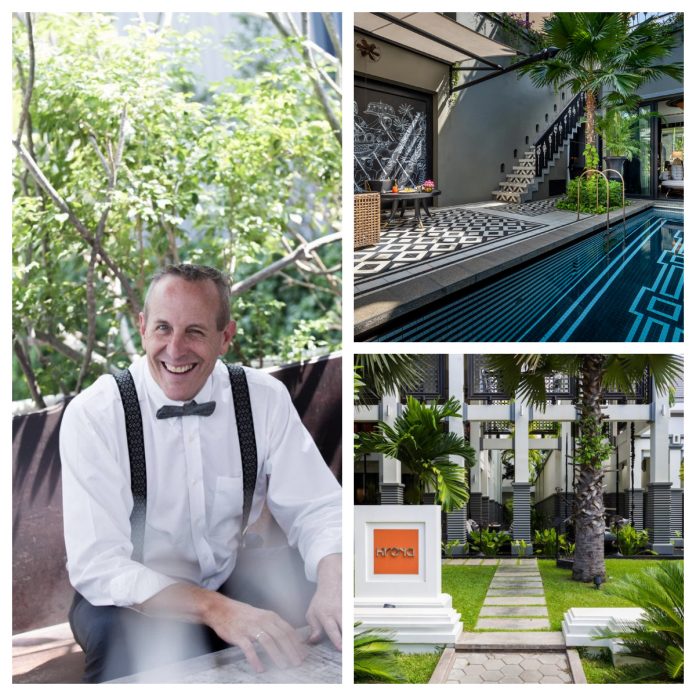 Shinta Mani Angkor and Bensley Collection Pool Villas have rebranded and reopened for high-end visitors to Siem Reap. Cambodia Investment Review was invited to not only see the reopening but hear what plans the group has for the future.

While the pandemic affected the whole of Cambodia, Siem Reap was particularly hit-hard. As a city that relied almost exclusively on tourism the loss of almost 7 million visitors was harshly felt.

For the last two years, the landscape has been dominated by closed hotels, bars and restaurants, as well as endless building work, but things are slowly starting to improve and rather than closures establishments are now reopening, even if it is under a new normal.

The previous incarnation of the Shinta Mani Angkor in Siem Reap

The brand of Shinta Mani and the Bensley collection are no strangers to those who seek luxury accommodations when they travel. The flagship hotel of the group the Shinta Mani Wild recently won the award as the best resort in Asia and for many years the group were a popular fixture in Siem Reap.

As for the reason for the merger, Jason Friedman who works as the Concept and Creative Director for the company said: “We realized that we had an opportunity to retool the brand to provide a better experience to our guests by bringing all of the brands together under the Shinta Mani flag”.

As things currently stand it is only the pool villas that are open, with the company adding that they would be monitoring incoming air traffic to the city before embarking on further reopening and expansions.

Yet while it is “only” the pool villas that are open, they epitomize everything that makes the Bensley Collection so synonymous with both luxury travel, immaculate service and amazing design.

Despite only being open for just over a week, the group has been careful to have things fully in order and ready to go. A private Bensley Collection Pool Villa has a rack rate of $990, although this can drop to as little as $400, depending on season and promotions. Other rooms will run from as little as $200 a night as and when further openings occur.

And while expensive by conventional standards it is extremely competitive from a global luxury standpoint, one reason why the hotels within the group regularly win prestigious awards.

The villas themselves consist of a private pool, en-suite bathroom, jungle-themed bathing area, as well as a second floor with an area for relaxation, as well as a place to eat breakfast, have one of the on-site barbecues organized by the hotel, or even have a private massage on the outdoor bedded area.

And on top of this, you get your own private butler whose job it is to look after your every need, be it a request for flowers delivered to your room, rose petals in your bathtub to something as simple as ordering you a TukTuk. And this was certainly an area where the Shinta Mani in Siem Reap really shone.

Our butler who had named himself G1 – officially to make his name easier for foreign guests, could not have been more helpful. He immediately informed us that he could be gotten through using the old-school 70’s style phone, or by WhatsApp, with us immediately exchanging numbers and opting for the later.

Of course, it is a butler’s job to be polite and look after their guests, but the staff at the Shinta Mani Angkor and Bensley Collection Pool Villas genuinely seem to not only enjoy, but take pride in their jobs. With G1 telling Cambodia Investment Review “I have worked at Shinta Mani since 2014 under a number of different roles before becoming a butler.

We go through numerous regular training, but it was with our head butler that I went through the Shinta Mani philosophy for customer service”. And if our stay was anything to go by then it is a philosophy that works.

And while one could easily spend their time entirely in their villas, the Shinta Mani Angkor also offers a number of other top-class amenities, such as a gym, two larger swimming pools and a spa, inclusive of the option for private massages in your room.

There are also plans to renovate the current on-site restaurant into a “plant-based sustainable dining experience” according to Executive Assistant Manager Chandra Oum. Although much like other elements of the reopening this would come with time as dictated by as and when tourist numbers increasee.

Shinta Mani Ankor and the rebranding of travel in Cambodia

While the resort is primarily aimed at the touristic market it also offers a level of luxury and amenities perfect for the business traveler, such as excellent WiFi, dedicated areas in and outside the room for working.

There is also a drinks filled lobby that would be perfect for business meetings, with Creative Director Friedman adding “We will be launching dedicated “zoom pods” so people that do need to work can have a private space so as not to bother their travel partner”.

Another area where the Shinta Mani Angkor shines is in the rebranding of Cambodia into a high-end, rather than a backpacker destination, something previously covered by Cambodia Investment Review.

In a previous interview General-Manager of the Shinta Mani Wild David Steyn told Cambodia Investment Review “We are trying to create a situation where people spend more quality time in Cambodia, rather than rushing off to another place”.

A point echoed by Friedman regarding the Siem Reap resort “We look forward to coming out of COVID and re-establishing Shinta Mani as the benchmark hospitality experience in Siem Reap”.

And guests need not only stay in Siem Reap with Friedman adding the company was offering perhaps the first-ever luxury tour of Cambodia, which would cover four extremely unique experiences.

“This would consist of visiting the temples of Angkor Wat while staying at Shinta Mani The Bensley Collection Pool Villas, followed by a beach escape at The Six Senses Krabay. Guests could then move to a jungle adventure at Shinta Mani Wild, before finishing with a luxury stay the Rosewood Phnom Penh”.

It should also be noted that the group as a whole contributes massively to social and charitable projects within Cambodia, such as funding a team of wildlife rangers, offering micro-finance loans, as well as being one of the few companies to have provided ongoing food assistance to their furloughed staff.

And in essence, this could and should be the benchmark for the growth of tourism within Cambodia, high-end travelers, sustainability and more money going back into the local community. And it is in these areas that the Shinta Mani Angkor and Bensley Collection Pool Villas and the group as a whole are truly acting as trailblazers.