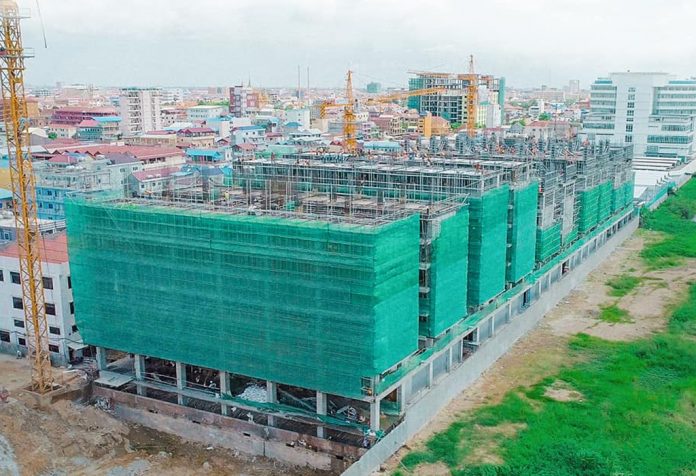 Real estate developers in Cambodia should transition to ‘affordable or at least mid-tier’ residential developments according to CBRE Cambodia – as the firm highlights an oversupply of high-end development in the market.

Speaking at the launch of the firms flagship report ‘Fearless Forecast 2022: Foundations of a Tiger’ Lawrence Lennon Managing Director at CBRE Cambodia commented: After a slowdown in high-end condominium launches in the past two years, CBRE predicted no new launches this year.

“It said the focus would be on affordable and mid-range properties to meet the demands of a population with an average age of 27, with 55 percent in the Gen-Z and Gen-Y age groups,” he said.

In addition to lowering the price of units– the firm also recommended that developers focused on outside Phnom Penh’s central location and utilized the increasing infrastructure being built.

CBRE Cambodia has previously raised the opportunities for development in Phnom Penh’s ‘Southern District’ stating the private sector has the chance to effectively transform the development trajectory of the entire city, and in turn the nation of Cambodia.

“Borey projects will continue to be the driver of residential activity, condominium developments will remain slow – both depending on location, positioning and product differentiation. Outer suburban land sites will present the highest growth opportunity as infrastructure develops and activity shifts to more decentralized locations,” Lennon said.

The majority of funds will be directed towards the developer’s new 31-storey condominium is Phnom Penh’s Sen Sok District – with a one-bedroom and two-bedroom unit at $39,000 with buyers can get a home with a $299 monthly payment with no interest nor down payment.

“Demand in the affordable condominium market [under $70,000] should remain strong – while the higher-end market may begin to drop over the next few years due to oversupply concerns,” the company said during its IPO.

It was predicted Cambodia would need an additional 50,000 homes a year until 2030, to properly accommodate a city population that is expected to be between 4 and 7 million, a large increase from around 2 to 3 million today.

However, many have reflected that current salaries still need to rise for low and middle-income households to even afford this price range.

ERA Cambodia announces plans for 2023 reinforcing the potential of condominiums...