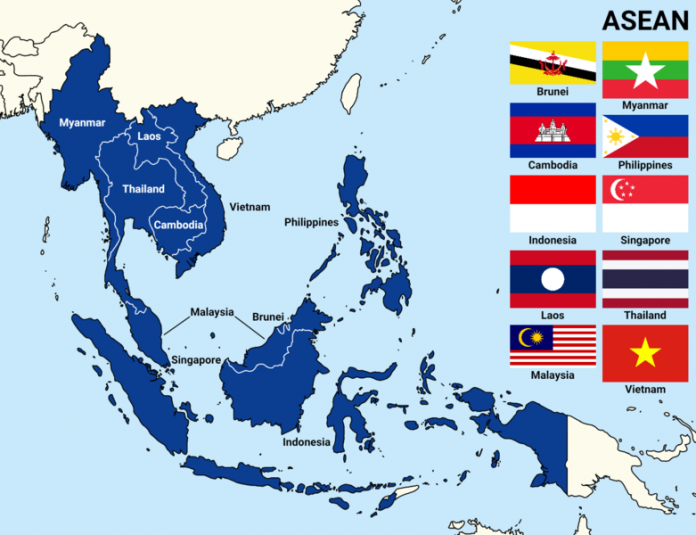 Despite the Omicron variant of COVID-19 causing spiked infection rates across the globe, ASEAN economies are expected to continue their upward trend due to high vaccination rates and a bright long-term outlook.

The Singapore-based ASEAN +3 Macroeconomic Research Office (AMRO) presented their quarterly economic update on the region projecting confidence that the region could withstand rising interest rates in the United States as well as global supply disruptions that have lasted longer than expected.

AMRO Group Head and Lead Economist Dr. Ling Hui Tan said: “As long as Omicron doesn’t lead to significantly more delays in reopening or repeated circuit breaker type lockdowns as we’ve seen in Europe and parts of the United States, the long-term outlook for ASEAN +3 should remain intact. The fundamentals are positive, such as a growing middle class, expanding inter-regional trade and investment, and rapid progress in digitalization.”

However, AMRO downgraded its projected GDP growth for Cambodia in 2022 to 5.2 percent from its October projection of 6.6 percent, mainly due to the continued lack of tourism.

According to AMRO Chief Economist Dr. Hoe Ee Khor: “The main reason is because of the high dependence of the Cambodian economy on tourism. Cambodia has been one of the most successful [countries] in terms of ramping up vaccination. The vaccination rate has reached over 80 percent for Cambodia and so it will be able to open up its economy much more than most countries in the region.”

He said Cambodia’s border policy, which allows for all vaccinated travelers to enter the country, is the most open policy in the region, but it doesn’t mean tourism will return any faster.

“Because of the fear of infection in other countries, the tourism sector will take more time to recover, and it’s a big sector for Cambodia, so we have shaded down the growth this year,” he added.

Dr. Khor noted that mass tourism will likely be replaced by more specialized forms of travel like eco-tourism, something that Cambodia has prioritized since the beginning of the pandemic.

Supply Chain Disruptions to stretch into 2022

AMRO said ASEAN economies have continued to be affected by global supply chain disruptions that may continue into 2022.

“Congestion in major global ports persisted into the second half of 2021 due to a confluence of factors including continuing local labor shortages and capacity constraints,” AMRO reported.

While it’s unclear when global supply chains will return to normal, the recent initiation of the Regional Comprehensive Economic Partnership (RCEP) free trade agreement should shore up supply chains in ASEAN.

Dr. Tan said: “RCEP certainly has the potential to strengthen supply chains in ASEAN because it effectively creates a single market for intermediate goods. Inputs from the 15 member states will be treated equally for determination of origin and this makes it easier for the corresponding outputs to enjoy preferential tariffs.”

She added that raw materials and intermediate products made within RCEP countries will be to able move between the countries without tariffs.

“This should integrate the supply chain advantages of the +3 [Japan, Korea, and China] with the producers in ASEAN. Low-cost manufacturers in ASEAN for example will be able to use high-value-added inputs such as semiconductor items and chemicals originating from Japan and Korea and the outputs can be further processed in China, for example.”

Dr. Tan said companies hoping to avoid tariffs imposed by the United States on Chinese-produced goods could take advantage of this concept and keep more of their production based in Asia.

The panel noted that the rise in global inflation was a cause of concern but wouldn’t likely affect the region’s long-term outlook or cause a spike in interest rates.

Cambodia’s inflation rate jumped from 1.7 percent in February 2021 to 3.4 percent in August 2021. After dropping to 2.9 percent in October, it rose again to 3.8 percent in November.

Dr. Koh said: “At some point, because the Fed [United States Federal Reserve] is tightening interest rates, we expect rates to go up, but what we see is the region is lagging behind in terms of the business cycle and because of that there’s a still a large negative output gap, and growth has also been disrupted by the Delta variant.”

He said central banks in the region will continue to keep low interest rates until the output gap of the economies narrows and more sustained growth is shown.

“The fact that inflation here is relatively low has provided central banks with the space to keep the monetary policy relatively accommodative. They will start moving the rates only when they see inflation coming up.”

Dr. Hui said economic scarring of some sort was inevitable considering the pandemic has stretched into a third year, with the most important factors being the loss of learning due to school closures and the deterioration of skills due to unemployment

The hopeful rebound of labor forces and the return of foreign workers to regional economies would also impact the severity of any potential economic scarring.

She said fiscal support measures have also hidden the true impact of the pandemic on many businesses.

“The extent of damage to firm balance sheets will only really become clearer after these support measures are lifted,” she said.

While AMRO sees obstacles in the short term for the region, it expects that these risks will all but disappear within five years.

“While the rise in global inflation is likely to prompt major advanced economies to roll back extraordinary monetary support earlier or more sharply than anticipated, the spillover effects for the region is likely to be limited because of greater resilience.”