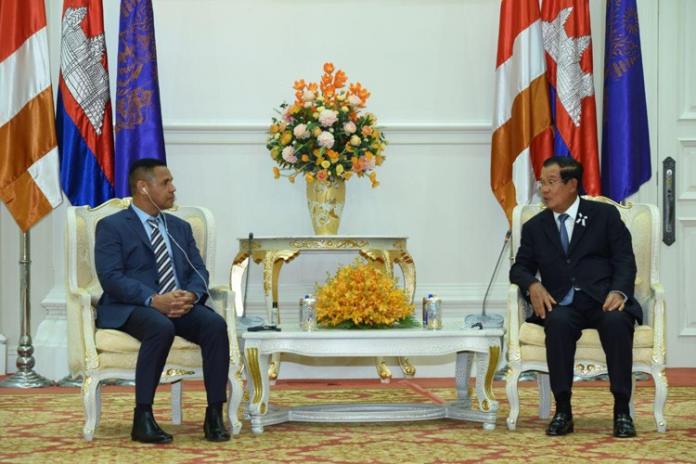 The Ambassador for the Democratic Republic of Timor-Leste to Cambodia H.E. Ermenegildo Lopes and Cambodia Investment Review discuss hopes for trade cooperation with Cambodia, ASEAN aspirations, and special economic zoning.

Future trade between Timor-Leste and Cambodia

Regarding trade, the ambassador pointed out several areas in which he felt that Cambodia and Timor-Leste could collaborate, such as in the garment sector, the special economic zones, and tourism.

The garment industry was an area of particular interest to Timor-Leste, with the ambassador stating his country would like to learn from Cambodian success in the sector.

He also stated that it was an area with which Timor-Leste would specifically be interested in Direct Foreign Investment (DFI) from the Kingdom.

Regarding the special economic zone (SEZ) in East Timor’s Oecusse district, a Timorese coastal exclave surrounded on three sides by Indonesian territory he was particularly enthusiastic about its potential and how Cambodia could help.

“We have visited the SEZ’s in both Kandal and Phnom Penh to learn from the Cambodian experience. Once implemented we expect the zone to employ up to 30,000 people with there being a huge potential for Cambodian investment within the zone”.

East Timor has a relatively open economy and allows both foreign ownership through direct foreign investment as well as joint-ventures with government and local private sector companies.

Timorese imports to Cambodia remain minimal, amounting to just $3,540 in 2020, all of it being coffee, according to OEC.world.

Despite the relatively small amount of bilateral trade between the two countries the ambassador remained upbeat about the potential for future growth: “We feel that once we are inside ASEAN trade will increase. Timorese coffee is famous the world over, but we also have large reserves of natural resources, such as oil and gas. We feel Cambodia and the rest of ASEAN would benefit greatly from having Timor-Leste as a member.”

Aside from their ASEAN aspirations the nation also met the criteria for Least Developed Country (LDC) status in 2015, 2018 and 2021, which reduces tariffs on many Timorese exports. The UN have stated they will reassess this in 2024.

East Timor is open to tourism

Despite boasting amazing scenery, pristine beaches, tropical islands and some of the best diving in the region Timor-Leste remains one of the least visited countries in Asia. In 2019 the country recorded 74,800 tourists, ranking 190th in the world.

This is though an area that the country not only sees as having huge potential, but also as another sphere where the two nations could cooperate, with the ambassador stating: “After the war, Cambodia had next to no tourist infrastructure, but in 2019 welcomed over 7 million guests. We not only want to learn from that experience but feel it is another sector in which Khmer investment would be greatly welcomed”.

Timor-Leste has a number of students studying tourism in the Kingdom, but overall lack a sufficient number of trained personal, as well as hotels and other elements essential to a flourishing tourist industry.

Timor is now fully open to vaccinated tourists and this includes Sinovac. The country is also one of the few nations to be visa-free for Cambodian passport holders.

Currently, though getting to Dili, the capital of the country is the main obstacle, with scheduled flights from only two destinations, namely Bali in Indonesia and Darwin in Australia, although this is something set to change shortly.

“We are currently in the process of setting up direct flights from Kuala Lumpur, as well as connections with both London and Portugal and we expect tourism to play a key role in our future development,” the ambassador said.

Timor-Leste gained independence from Indonesia in May 2002, after a 27-year war for independence. The country has had some civil strife since, but now largely functions as a multi-party democracy, with Presidential elections due to be held next month.

Upon independence from Indonesia, they did not automatically gain the right to join ASEAN, instead of applying in 2011, eleven years ago.

To join ASEAN consensus must be given from all 10 members states, with advocates for their admission including Indonesia, The Philippines (the only other majority Catholic country in Asia), as well as Cambodia.

The nation has also met the requirements for membership, requirements that have become much more stringent since the admission of Myanmar and Laos for example.

It is not officially known who is exactly blocking their admittance, but according to one expert who preferred not to be named, Singapore is currently the main sticking point to Timorese admission.

As to their future chances of joining Mr Lopes told Cambodia Investment Review, “We are 100 percent certain we will join ASEAN, particularly under the chairmanship of Cambodia, who have been very vocal in their support for us”.

“We also already enjoy good business relations with many members states, such as Indonesia, whom we border, as well as Singapore who we send patients to as part of our universal healthcare program,” he further added.

Ties between Timor-Leste and Cambodia

Timorese and Cambodian ties go back a long way, with the rival governments of the UN-backed Democratic Kampuchea and the Soviet backed Peoples Republic of Kampuchea.

They both supported The Revolutionary Front for an Independent East Timor, known by their Portuguese acronym FRETILIN in their struggle for freedom against Indonesian rule. Relations have remained strong since independence, with a Timor-Leste feeling they can learn a lot from Cambodia.

“The parallels between Timor-Leste and Cambodia are very profound. We are both post-conflict states and we feel that we can use the Cambodian model in how we rebuild our country”

Timor-Leste has recently completed a number of works in improving the infrastructure of the country, but there are still areas that need investment and improvement, with the nation being at a similar development level to Cambodia in the 1990’s.

2022 might be very much in its infancy, but with Cambodia holding the chairmanship of ASEAN the future for relations between Timor-Leste and Cambodia look bright.