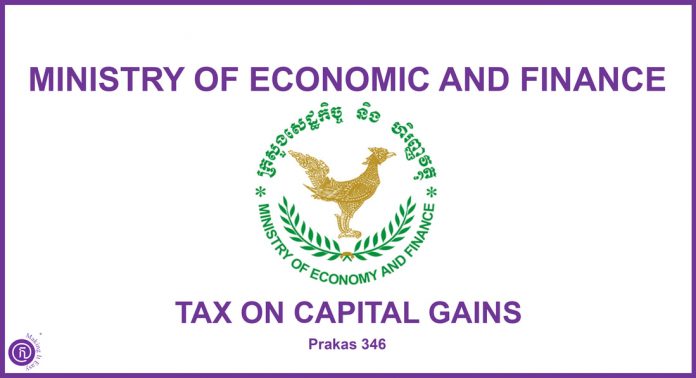 Regulators have not issued a statement on the planned implementation of a 20% Capital Gains Tax (CGT) on January 1 2022 – as rumors of another potential delay spread across the business community.

The proposed flat 20% rate from selling any capital asset is already applied for companies. This law would extend that requirement to individuals, most commonly for those looking to sell property for profit.

The CGT was introduced into law through Prakas 346 from the Ministry of Economy and Finance back in April 2020 and was originally intended to be implemented a few months later in July 2020.

A government statement at the time: “The government has decided to delay the date of the implementation of capital gains tax until the end of 2021 in order to give enough time for taxpayers and the public to comprehensively understand its regulations as well as being prepared to implement it smoothly and effectively.”

Business community positioned for a delay

Cambodia Investment Review previously reported that the European Chamber of Commerce in Cambodia (EuroCham) had actively recommended to delay the CGT an additional year, so the tax would come into effect earliest 2023.

This was one of the almost 50 policy recommendations to the Ministry of Economy and Finance during a meeting between EuroCham Chairman Tassilo Brinzer and MEF Secretary-of-State Dr. Phan Phalla earlier this year.

They chamber said, “This measure aims to help to continue to attract investments, in particular in the real estate- and construction sector”.

However, the CGT has been seen by others as an appropriate and fair taxation policy by the government and considered ‘low hanging fruit’ for Cambodia’s maturing taxation system along with increasing ‘sin taxes’.

Despite delaying the CGT as well as the economic impact of the COVID 19 pandemic Cambodia’s General Department of Taxation collected $2.56 billion in tax revenue between January to November this year, exceeding the 2021 targeted plan.

This has been attributed to the introduction of technology-based taxpayer registration system, which has expanded Cambodia’s taxpayer base, as well as a significant increase in the number of qualified staff.

However, some have complained of the proliferation of audits, a strict compliance regime and, in tandem, maintaining fluency with ever-changing complex regulations. As well as offering incentivized commission-based bonuses with 10 percent of penalties and interest awarded to the individual auditor.

Cambodia Chamber of Commerce request US to reinstate Generalized System of...

Cambodia and US Chamber of Commerce commit to better economic cooperation