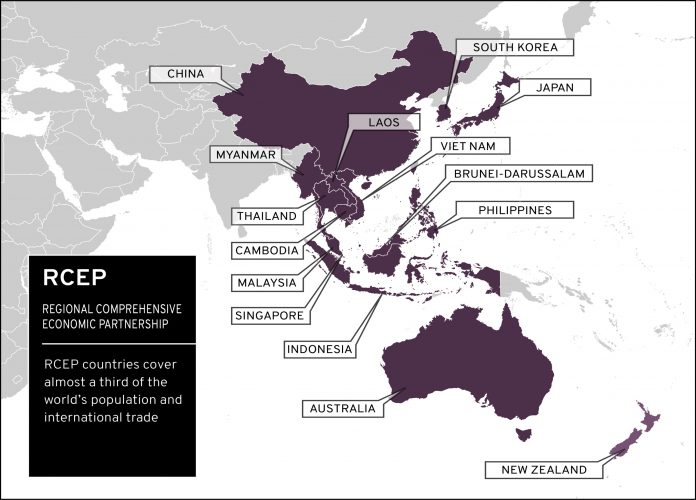 The Regional Comprehensive Economic Partnership (RCEP) free trade agreement is light on e-commerce rules and guidelines but otherwise could offers golden opportunies for RCEP Cambodia business to tap into regional and offshore markets, according to a panel of experts.

RCEP Cambodia agreement represents the largest free trade agreement in the world and accounts for approximately 30 percent of the globe’s GDP and population and expected to be ratified in January,

In the first of a series of webinars designed to spur private-public dialogue on the upcoming FTA, trade experts from the private and public sector discussed the agreement’s e-commerce chapter, revealing some glaring holes while shining some light on how e-commerce companies can still prosper in the face of absent or conflicting rules and standards.

RRCEP Cambodia opens the door to wider markets, including Cambodia

Under RCEP, Cambodian businesses can expect reduced tariffs on several types of goods, including apparel and sweets, and relaxed Rules of Origin guidelines.

However, almost everyone on the panel agreed, RCEP’s e-commerce chapter was “shallow” and listed only general suggestions for potential frameworks.

Under RCEP, these tariffs will be reduced to zero percent in equal increments over 15 years.

“This is true for almost every kind of product, so most products in RCEP will experience tariff cuts. Some of them will come fast and some of them will matter a lot because they’re in markets that are very lucrative for Cambodian companies looking for new opportunities,” Elms said.

RCEP’s Rules Of Origin protocols will also make it easier for companies to produce products within Cambodia to be shipped throughout participating RCEP countries.

“RCEP provides more flexibility around how we make products, including agricultural goods. That is very useful for firms based in Cambodia,” Elms added.

On the downside, Elms said RCEP missed a chance to offer firm guidelines on three key components for e-commerce companies: the free flow of information across borders, where and how data is stored, and customs duties for cross-border electronic transmissions.

Currently, electronic transmissions such as education and graphic design services are duty-free, but this is not guaranteed under RCEP.

“That should have been anchored in RCEP and was not. Why not? Because at the end of the day there were governments in RCEP who refused to participate in ambitious rules on these three areas.

Most of those governments are not going to be there on the first day. So we have now got poor rules designed by people who aren’t even at the table. It’s very frustrating,” she said.

However, Cambodia and other ASEAN countries can rely on digital trade frameworks in current ASEAN trade agreements to navigate these three hurdles and still reach wider markets under RCEP.

Sok Siphana, Senior Advisor to the Royal Government of Cambodia, agreed that the RCEP e-commerce sector was limited but said it was suitable for a country like Cambodia that is still in the nascent stages of a growing digital industry.

He likened the onset of RCEP and the flurry of trade agreements and regulations swirling around e-commerce to a wine that needs time to age before it can be completely enjoyed and Cambodian entrepreneurs can easily work within the RCEP framework because it “enables the basic trading aspect in e-commerce”.

He said some provisions in RCEP, like requiring an electronic signature for purchases, are new to Cambodian businesses.

“Introducing this legal aspect of the contract in the digital world, it’s unraveled a new dimension of doing business in Cambodia,” he said.

Siphana referenced recent regulations passed by the Cambodian government, including the new Law on Competition and the Law on Investment, as proof that the country is moving forward in this arena, and likened the occasion to Cambodia’s push to increase trade when it joined the World Trade Organization in 2004.

“RCEP is like a second generation of reform that will push the Cambodian government to introduce a lot of other measures to stir up investment in Cambodia,” he said.

Elms cautioned that small businesses operating across borders may encounter trouble with the current VAT and tax rules in the region.

She said the current system involves thresholds that allow small businesses to not pay taxes or file customs paperwork if the goods sold are under a certain amount.

However, these thresholds vary from zero to $800 and are constantly changing. She said Australia recently set the threshold to zero, meaning the smallest of orders is subject to customs fees and taxes, something that makes doing business across borders unfeasible for small businesses.

She added that inconsistent VAT rules regarding e-commerce — including VAT on digitally delivered services — could hurt small businesses because they may end up losing money by adhering to the rules.

Siphana said that the Cambodian government has always been open to listening to the private sector to inform policy decisions and that any regulations hurting small companies could always be amended or removed.

After the digital trade landscape was laid out at the webinar, private sector actors were invited to speak about RCEP’s digital potential in Cambodia.

Maxime Rosburger, the Chief Operating Officer of Kiwipay Pte Ltd, said logistics and banking systems in Cambodia needed to be addressed for the country to fully reap the benefits of RCEP.

Currently, he said, a lack of payment gateways hurt e-commerce companies and those involved in digital services.

He said, for example, that a Cambodian worker who is paid $50 for a freelance assignment on a website like Fiver has to pay around $10, or 20 percent of their pay, just to transfer the money to their account.

Also, logistics needed to be sped up and streamlined because those ordering products expect them within three days, not three weeks, and the lack of options available combined with a slow customs process prevents this from happening.

One solution, he added, would be to allow Cambodian merchants on big-name platforms such as Amazon and AliPay.

RCEP Cambodia and the regions tech sector grows during pandemic

Managing Director of Dynamic Technologies and AusCham committee member Kenneth Tang said e-commerce is mainly a domestic entity at the moment and the tech sector in the Kingdom will only grow in the future regardless of RCEP’s digital policies.

In the last session of the webinar, government officials were invited to give their opinions on RCEP.

Rath Saravuth, the Director-General of International Trade, said the government was focused on supporting small to medium-sized enterprises and RCEP will help grow domestic e-commerce.

“RCEP will support the development of the domestic e-commerce industry in Cambodia by introducing confidence and trust in e-commerce, [and] providing frameworks for consumer protection and data protection,” he said.

Jeremy Gross, the Director of Capacity Building at the Economic Research Institute for ASEAN and East Asia (ERIA), which co-hosted the virtual discussion with Australian Aid and the Ministry of Commerce, said it will take time for the benefits of RCEP to come to fruition.

“RCEP is not like turning on and off a tap,” he said. “It’s going to be a process and take a while and many interventions to actually reach and attain all the benefits we hope to from the agreement.”

The Kingdom’s digital payment market size value has not been verified however industry estimates vary between $10 – $20 billion last year alone.