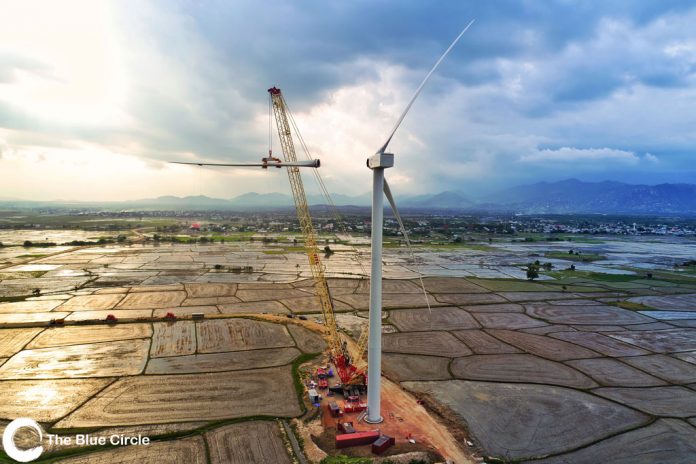 A deal was expected to be signed between the French-owned firm and the State-run electricity utility in the second half of last year however price disputes and now uncertain power usage attributed to the COVID 19 impact on industry seems to have put the entire project on hold.

The cost of investing in wind energy was estimated between $1.5-$2 million per megawatt, meaning the pilot project was expected to bring an investment of around $140 million.

The Blue Circle has proposed a PPA price of $0.688 per kWh, a price which has been so far rejected by EdC.

“The current pandemic situation makes the visibility on energy demand quite low which has lengthened the negotiation process with EdC. We maintain that our proposed PPA price of $0.688 per kWh is already the lowest price for wind energy in Southeast Asia,” Brucker said.

“It is also consistent with the latest solar PPA price signed by EdC at $0.76 per kWh and lower than the cheapest PPA price signed for a coal power plant in Cambodia at $0.743 kWh,” he added.

Bridget McIntosh, Country of Director of EnergyLab told Cambodia Investment Review that the current price offered was highly competitive, adding, the project is great for EdC as it’s much closer to transmission lines, comparing to say the cost to transmit the new coal power imports from Laos

“It’s certainly lower than EDCs latest agreement of $0.079 per kWh for the upper Tatay hydro power; and significantly lower than the current wind projects in Vietnam at $0.085 per kWh,” McIntosh said.

“But it’s not all about price – the economic, energy security and grid complimentary benefits of wind power all add up to a better outcome for Cambodia,” she added.

Industry insiders have raised further doubts over the project saying it’s a very hard sell at the moment as EdC currently prefers solar over wind because there is already an oversupply of power at night and in the wet season.

Coal power contracts have 80% take or pay clauses, which means EDC has to pay even if they don’t use the power. Wind projects produce roughly 50:50 day and night; 50% wet and dry season, which is actually helpful to incorporate more solar, they said.

Keo Rattanak, Director-General of EdC agreed that technically and financially the Ministry is leaning towards more solar. Adding, however it was not simply an EdC decisions to make as Finance and Energy ministries are big decision makers on this size.

“It would be the collective decision of MEF, MME, EAC and EDC,” he said.

Energy Minister Suy Sem has previously said the ministry’s number one priority is the development of electricity sources to improve production capacity, transmission, distribution and connection.

He added that the Ministry has been working to ensure that the Kingdom’s electricity supply remained stable and meets growing demand.