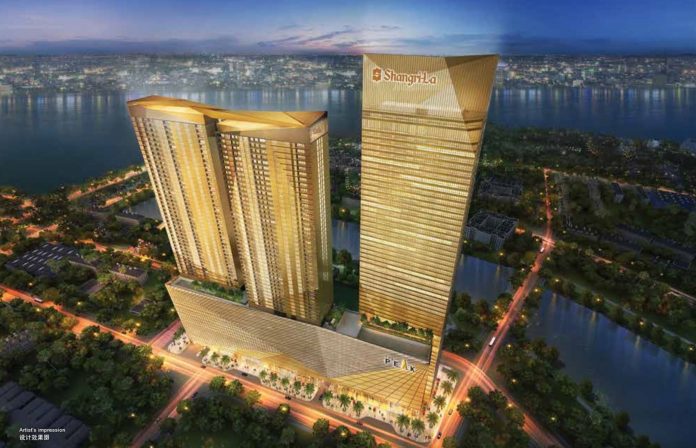 Oxley Holdings Limited (SXG:5UX) the joint developer with WorldBridge Land (Cambodia) of major development project ‘The Peak’ in Phnom Penh has announced all retail, residential and office units are complete, adding the project was 87% sold.

The developer added that construction of its 5-star Shangri-La Hotel is on-going and expected to be completed in 2022. The comments were made in the company’s financial statement submitted to the Singapore Stock Exchange.

The developer has entered into a Memorandum of Understanding with Asia’s leading luxury brand distributor and operator Bluebell Group as the manager of the retail mall of the landmark development.

China Railway Urban Construction Group (CRUCG) has been the main contractor for the mixed development project after issues with the previous developer.

In the financial disclosure the company stated its subsidiary Oxley Gem was still in legal proceedings with Sino Great Wall International Engineering in a Singapore court to seek compensation for all damages suffered due to SGW’s repeated breaches of its obligation.

Last year, Oxley Gem proceeded to commence legal proceedings to seek an injunction from the Cambodian court to evict SGW from the Project site and to enable Oxley Gem to exercise its lawful rights as developer and owner of the Project.

According to Singapore’s Straits Times report, SGW’s parent company fell into financial difficulties and soon mismanagement started and the project came to a standstill for a lengthy period of time. Oxley Gem, as the developer of the Project, had repeatedly sought to assist SGW to meet the contractually stipulated timelines and even granted goodwill extensions to SGW.

Overall, the international group was able to turn around its financial concerns from last year posting a net profit of S$49.5 million ($36.7 million) for the financial year ending June 30, 2021.

According to the company excluding the loss incurred from the voluntary administration of the overseas subsidiary group, and impairment and fair value losses recognized on the properties in Cambodia, the Group’s net profit would have been S$136.8 million ($101.6 million).

Ching Chiat Kwong Executive Chairman and CEO stated: “As the world grapples with the COVID-19 Delta variant, 2021 continues to be fraught with difficulties. Despite the challenges, Oxley achieved a respectable revenue growth of 33% to S$1.4 billion in FY2021 while profit from continuing operations of S$109.1 million was a significant turnaround compared with a loss of S$251.3 million in the prior year.”

“Oxley is pro-actively managing the construction activities in order to complete the projects expeditiously and monetize the sales proceeds to further reduce borrowings and strengthen the Group’s cash flows,” he added.